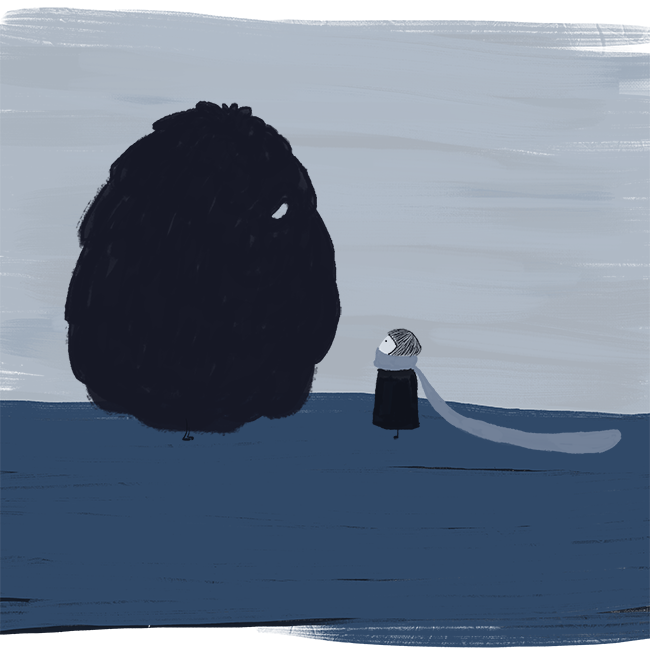 They look each other up and down. The girl tilts her head to the side and ponders over the creature in front of her. It is nothing like anything she has seen in her books. Big and furry. Oddly cut like a huge egg. Sad eyes. Unusually short arms.. You’re a peculiar shape, says the little girl at the creature. Well, so are you, replies the creature. True that, agrees the little girl.

They both look to the rabbit, and silently agree that the rabbit looks no different from what you would expect a rabbit to.

After a good nights sleep in the fresh air of the night, the three strangers begin to stir amidst unknown flowers and sounds. Both the creature and the girl awake with butterflies in their stomachs – the creature is too curious to feel sad.

The girl leaps to her feet, excited for a new day. So you live here in the forest. You must be forest creatures. I’ve read about these beings that live in the forest, giants, do you know of them? Are they real? Speaking quickly and almost out of breath, the girls’ eyes widen.

The creature and the rabbit eye each other, hesitantly. They are, the creature concedes. The rabbit shrugs. Can we see them? The girl enthusiastically asks.

Fear fills the furry tummy of the creature: Then we would have to go to the Giants Glade. But it’s not safe there.. 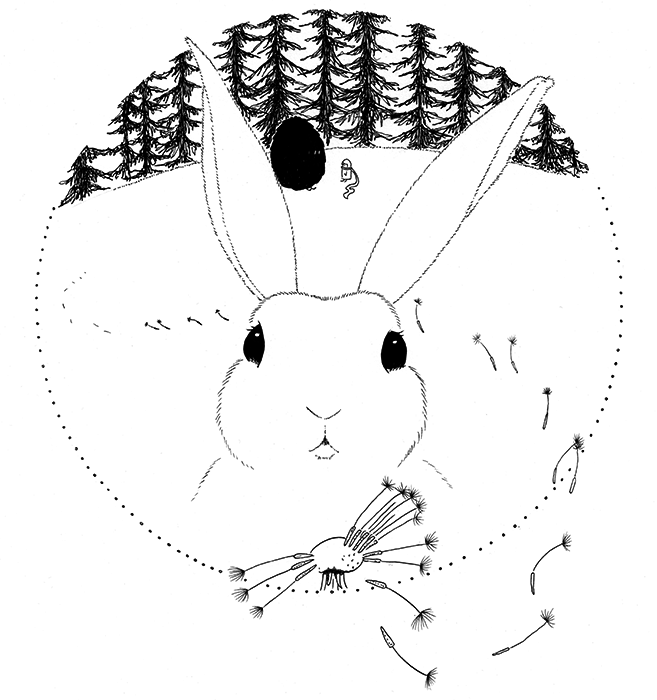 The creature continues to tell the girl things she’s read of and more, things that both frighten and excite her. We would have to leave at dusk, the creature explains, casting a glance at the rabbit who’s distracted by a withered dandelion. We have to be quiet. They can’t see us, let alone touch us. Then we’d be caught in their darkness. 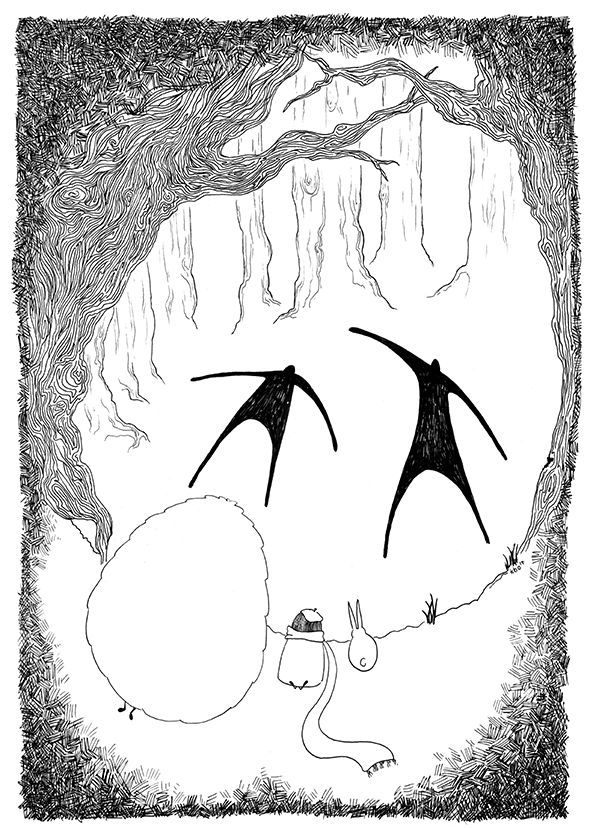 Later that night, on a small bank surrounded by trees, they lie quietly watching the strange dance of the woodland giants. A curious musical noise is coming from the clearing.
The sight is both beautiful and loomingly haunting.
All of a sudden, a crackling above breaks the silence – They all look to the sky. Flapping his wings hastily, the crow is circling hastily above their heads. He caws: Move – you’re in danger! 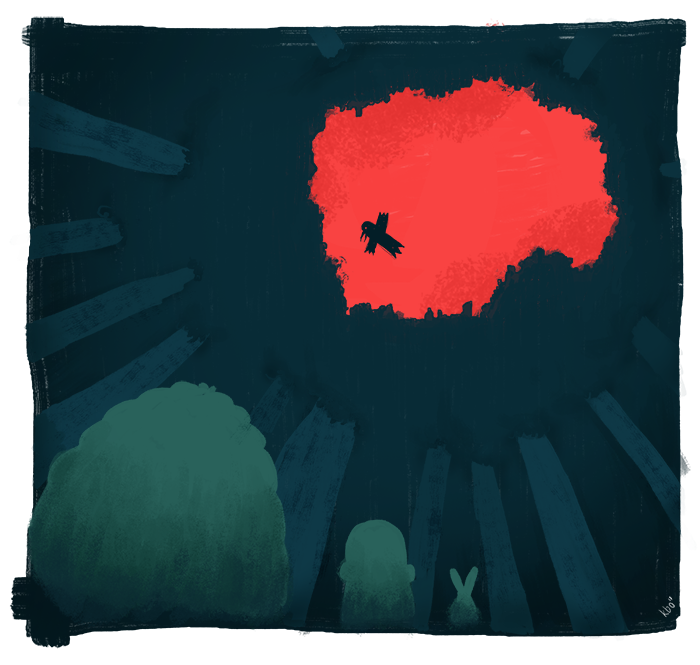 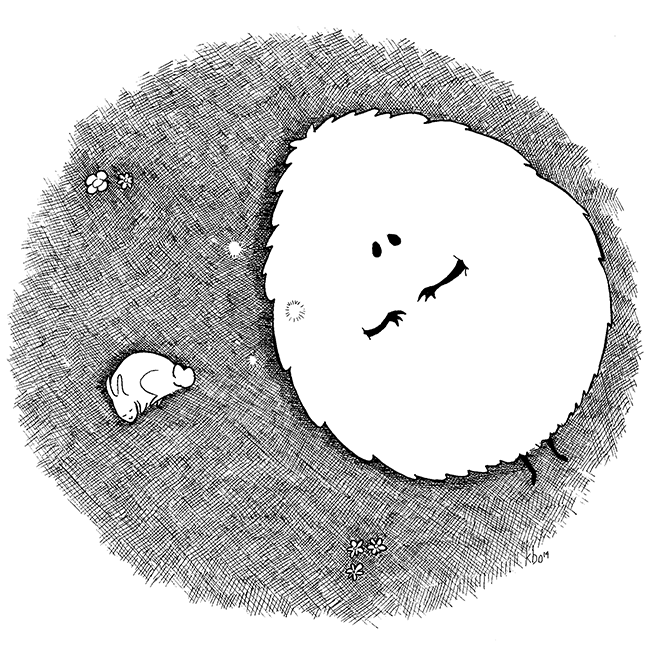 On a moonlit hilltop far into the forest a creature and a rabbit lay on the dark, damp grass. While the rabbit is deep asleep, the creature lay in the astounding silence of nature. He cannot sleep. He keeps wondering and pondering, why must life be so hard for someone like me. 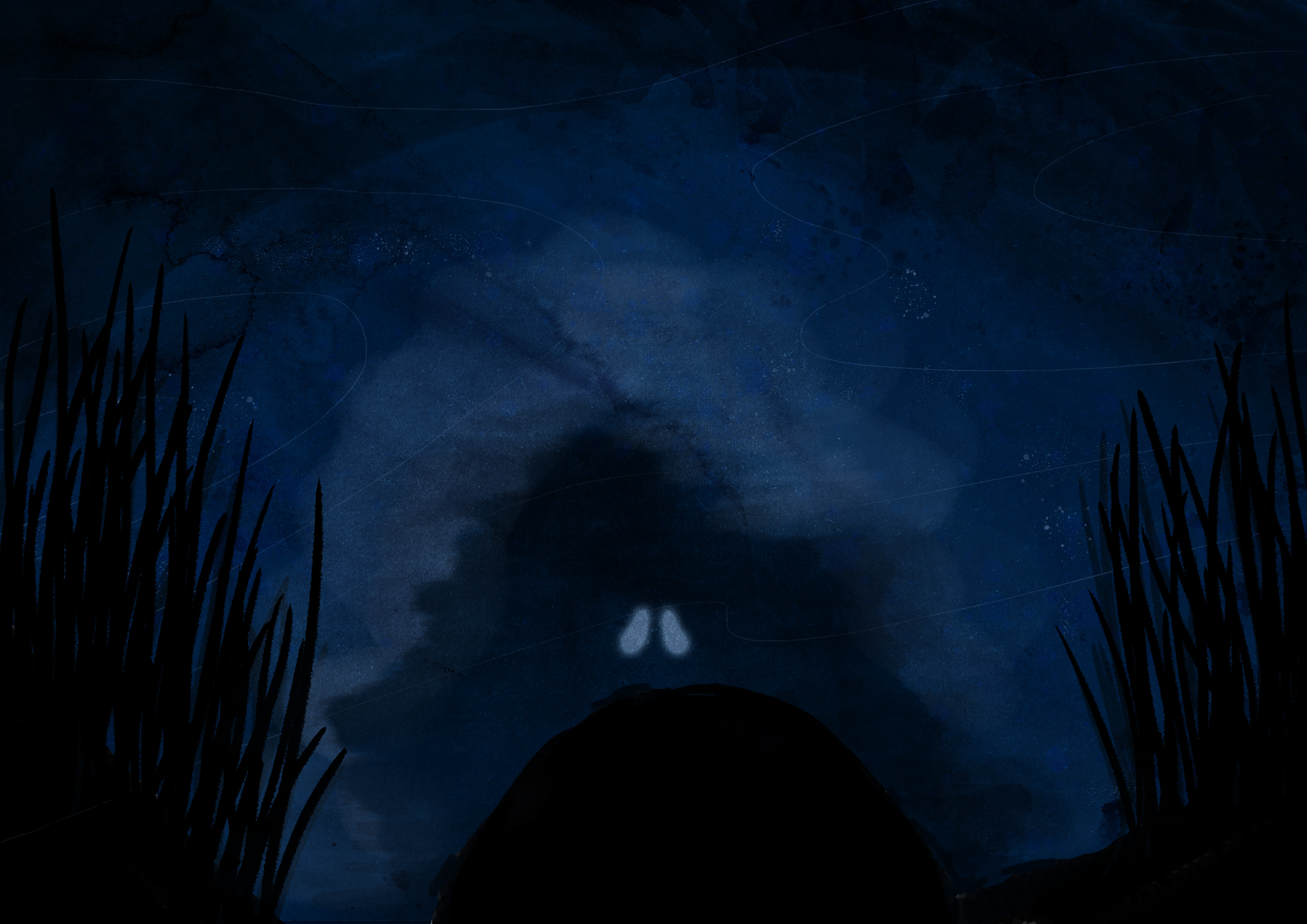 The creature feels large and misshapen, not fitting in with the rest of the world. So much larger than the rabbit, and yet so much more fragile. His friend, the rabbit, is full of vitality and doesn’t seem to mind or notice when the creature is unable to keep up. 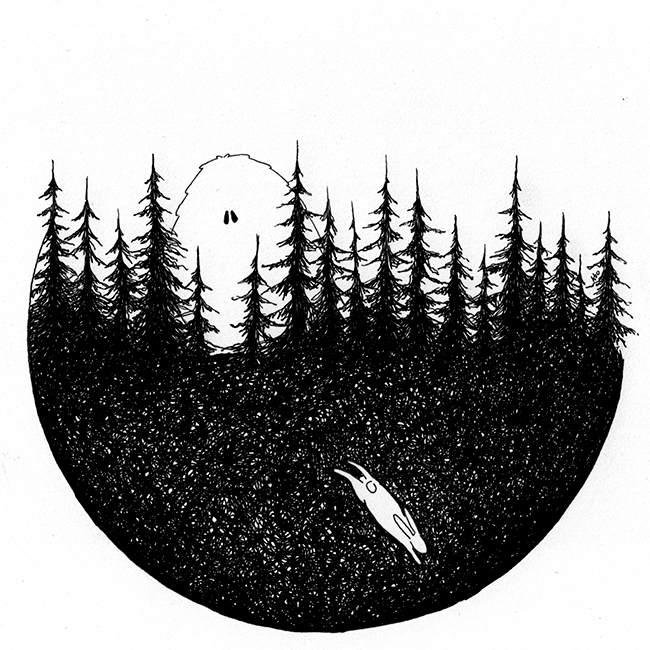 The branches of the forest trees whip and lash out at him, when he tries to follow. And he doesn’t seem to fit wherever the rabbit does. The rabbit is his only friend, but also a very good one.

Yet, he feels awfully alone sometimes. 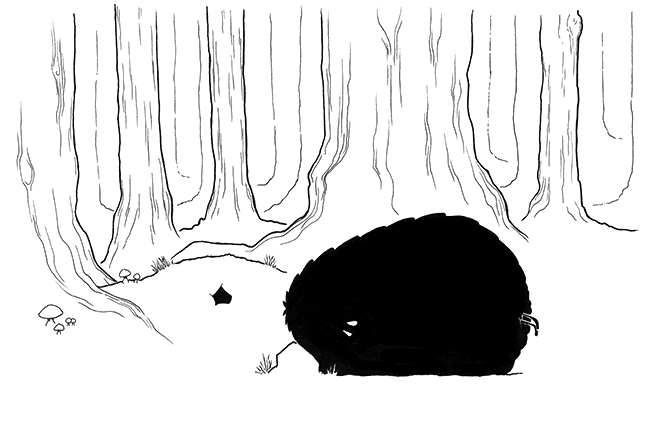 Time and time again, he even tries to explain his only friend how life feels to him, but he still comes up short, lacking the words to make the rabbit fully comprehend. 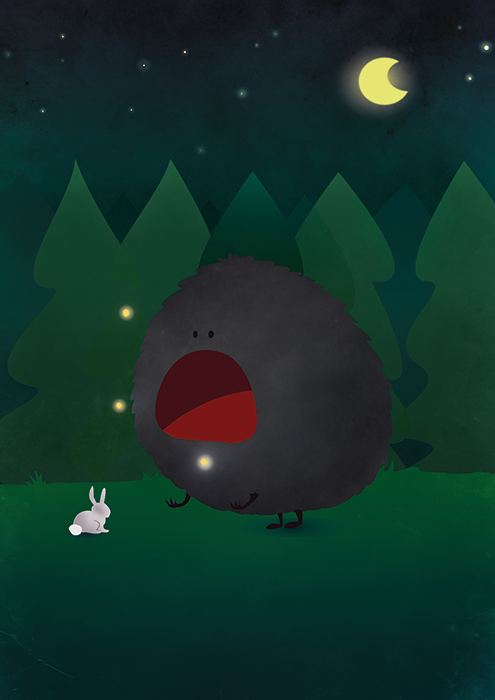 Life surely isn’t easy when you’re a huge ball of fur and emotions. 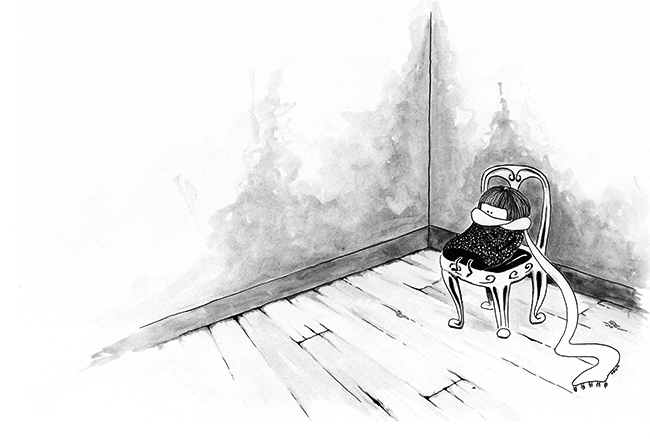 In a dark and cold house in the middle of nothingness lived a little girl. She had lived there for what felt like all of her life. In the house were long, resounding hallways, tall, dirty windows, tables that went on for miles, and ceilings with a distinct stale odour of damp. Even though there were other people in the house (her family), she never felt quite at home. It was as though she did not fit her physical surroundings at all, because the house did not want her to. 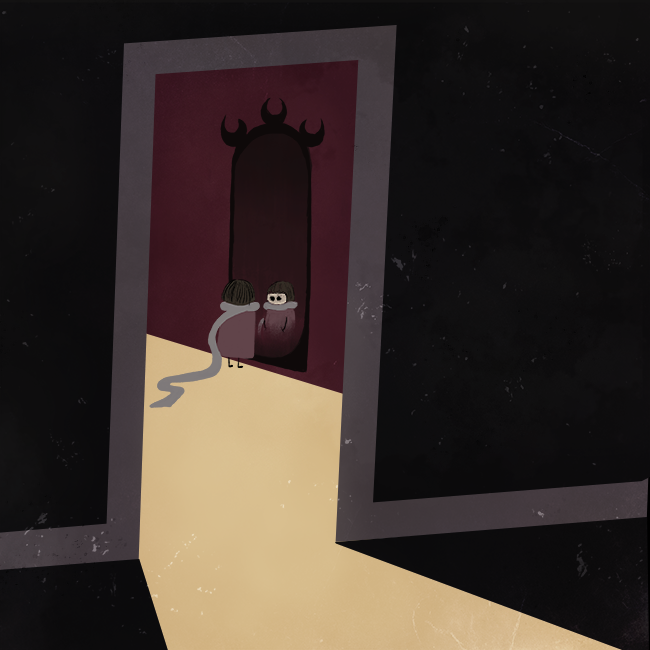 Wherever she went, it seemed as if the house wanted her to leave. Rather than reflecting images the mirrors of the house housed strange, yet familiar, creatures only visible by pale, nearly transparent faces with black eyes glittering in the dark. She never could recognise what greeted her when she stared into them. 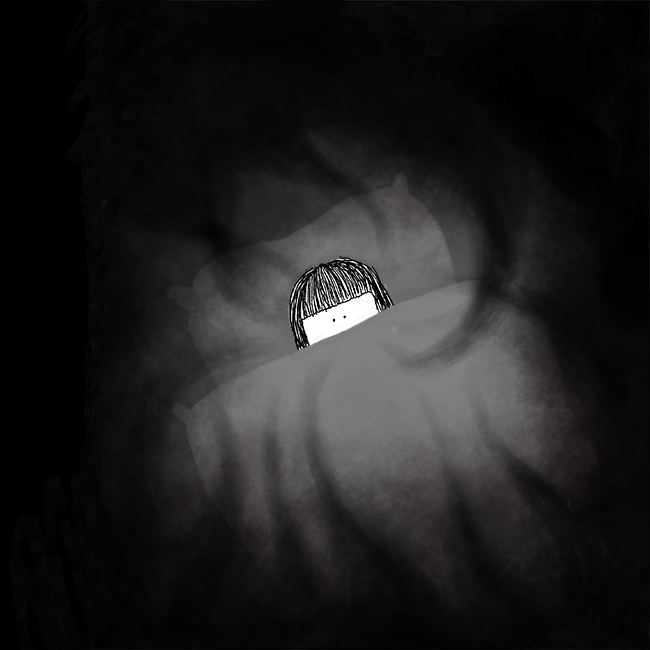 At night, she would lie and stare into the darkness, hide her nose under the old, dusty duvet. This was the only time of day the house would be completely quiet. Even the resounding hallways were silent. Only the peculiar raven would pick at the window, time and time again.

Still, as the darkness eerily crept up on her, it also gave her peace and a strange feeling of safety. 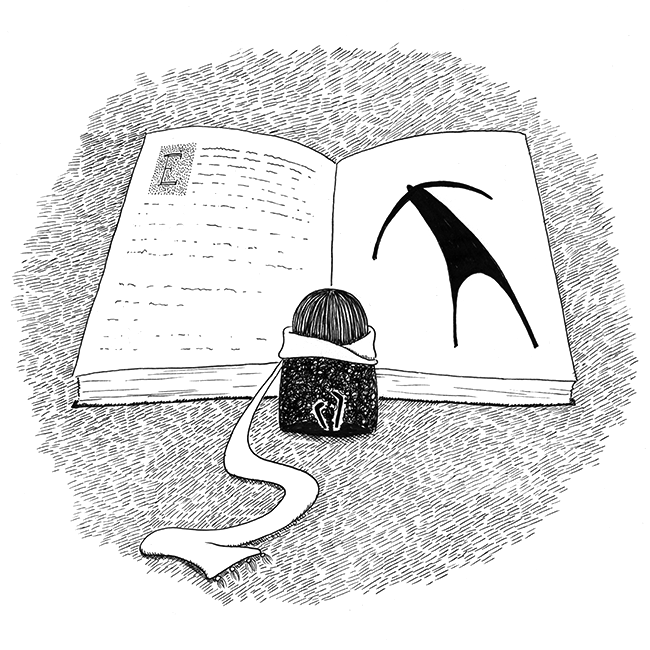 During daytime there was not much to do around the house. The girl liked to read fairy tales in heavy, dusty books, though. Since the hostile house wasn’t furnished with comfortable sofas, she would always lie on the cool floorboards, under which she could hear squeaking and crawling. In the books she read about creatures of the forest, giants, and other strange things. It felt comforting to know that the entirety of the world didn’t amount to the dank walls of the house.

She didn’t go out much, nobody ever did. Actually, she had never left the premises, not knowing what dangers await her on the outside.
One day, out of boredom, she decided to peak out the front door – just a peak, merely leaving the door half open. 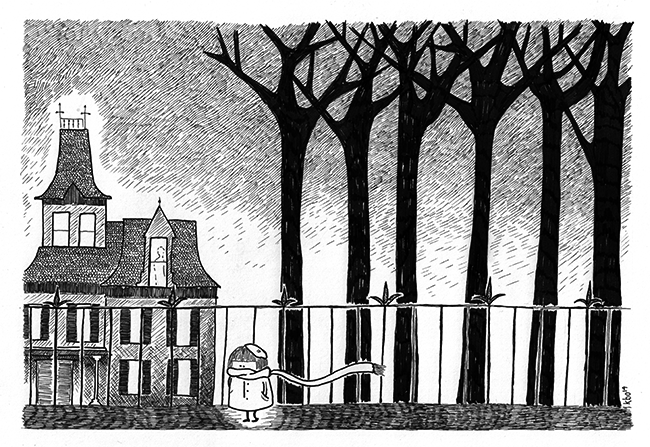 She barely noticed the massive main door slam behind her as she went outside. The raven circulated high above her head. From time to time it would cackle, before suddenly flying deep into the forest. There’s not much to stay here for, she thought, – I might as well follow.
So she did. 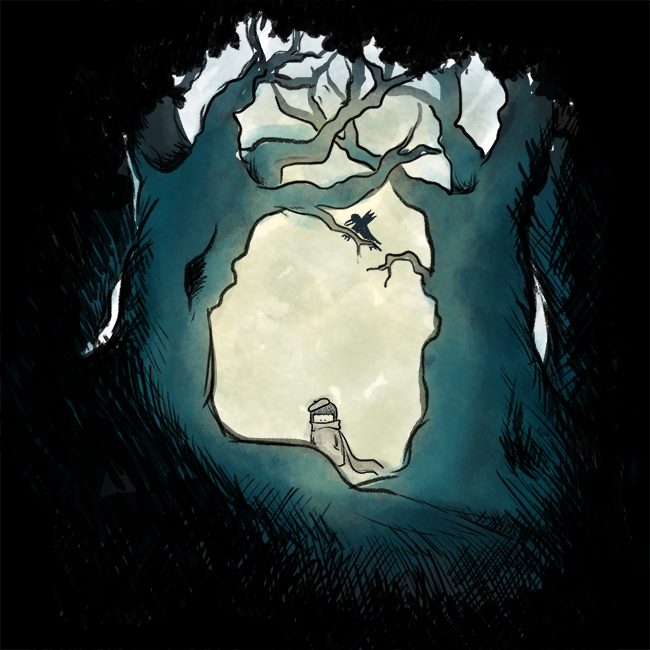 Soon she crossed the threshold into the strange forest. 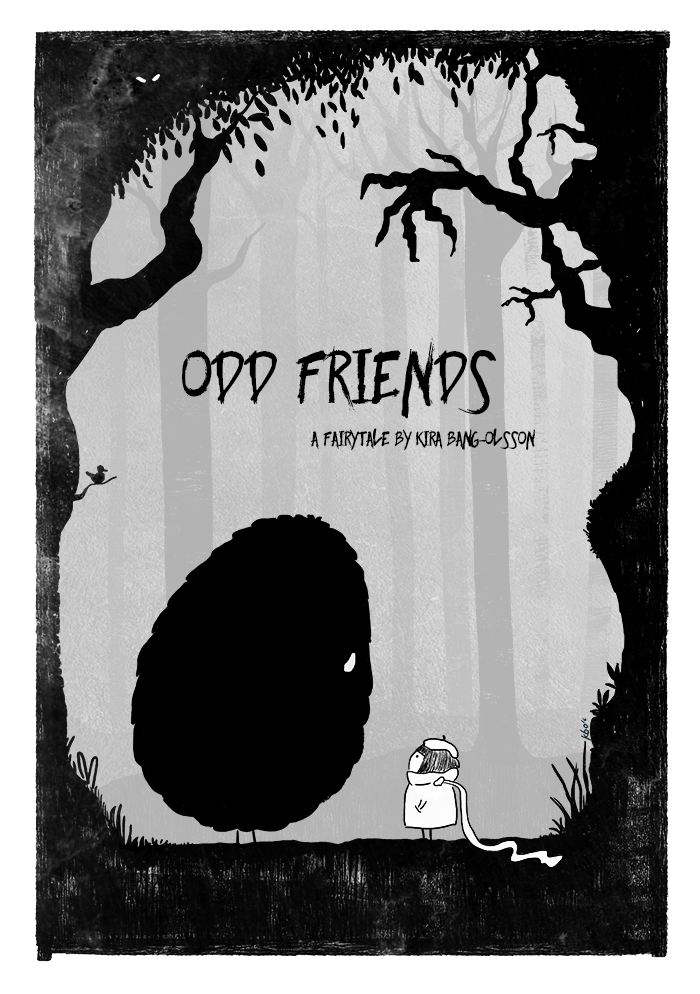 This is a tale for and about those who feel out of place, those who are odd, and those who find each other in unexpected places. This story is still being written and will be illustrated with different kinds of illustrations – they are both meant to illustrate the story and at the same time be an artistic and personal exploration. You might have seen some of the illustrations before – or maybe not, but most of them are new.

This fairytale has no ending yet – but it will.

Stay tuned – and come back to experience ‘Odd friends’. Part one will be online January 21. 2017. 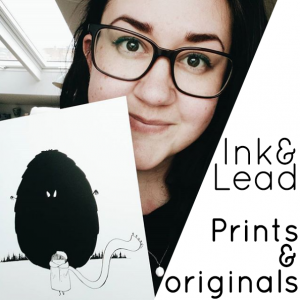 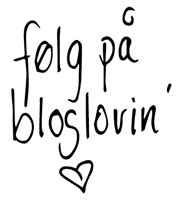 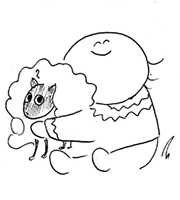